To say that one man saved Luke Air Force Base may be an exaggeration.

But that’s exactly what some say Rusty Mitchell was able to do.

Over 17 years, through land disputes, noise complaints and hard economic times, Mitchell, the director of Luke’s Community Initiatives Team, helped keep community support for the base strong in the West Valley and across Arizona.

He retired on Friday, bringing an end to his 40-year career in the U.S. Air Force.

Mitchell led the Community Initiatives Team since its inception in 2003.

Air Force and local leaders say he was instrumental in preventing development from encroaching into Luke’s flight zone in the early 2000s, and in helping Luke get the F-35 program in 2014, both of which secured the base’s future.

“I think he saved Luke for the state of Arizona,” said Peoria Mayor Cathy Carlat.

Two former Luke commanders, Gen. Robin Rand and Gen. Philip Breedlove, who both went on to higher positions in the Air Force, say Mitchell built his office into a national model.

“If anyone asks me, how do you blend a military institution with the local community, whether big or small … holy cow, I would use CIT as a benchmark,” said Rand, who was commander at Luke from 2004 to 2006 and retired in 2018 as commander of Air Force Global Strike Command. “That’s the blueprint.”

Since the community team was created, Mitchell has been the primary contact at the base for Arizona leaders, such as mayors and state lawmakers. He has become a close friend to many.

Therefore, the base is in transition.

But Mitchell believes the relationships he has fostered between the base and the surrounding communities are enough to stand up on their own.

“I don’t see a speed bump at all on that transition,” Mitchell said in a farewell video Luke posted on YouTube.

While the West Valley may know Mitchell from his civilian days, if you ask him his greatest accomplishment, the first thing he brings up is his time in active duty.

“A young fighter pilot in my early 20’s, flying A-10s over in Germany, that was a single-seat airplane, that’s just a young boy’s dream come true,” he said. “I wanted to be a pilot since I was 5 years old.”

Mitchell was in active duty from 1977 to 1998, flying fighters from Europe to the Far East.

Pat Mitchell, Rusty’s wife, said the Air Force has been her husband’s life since he graduated college. 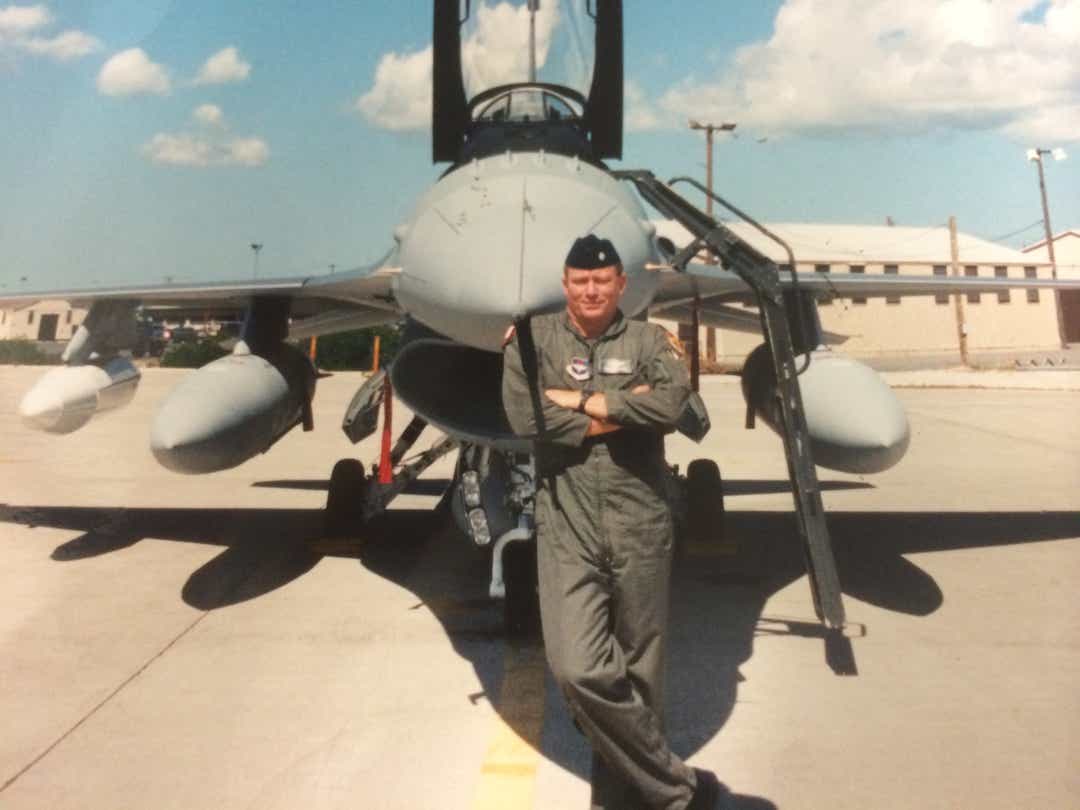 The Air Force brought Mitchell to Arizona a few times, first for undergraduate pilot training at Williams Air Force Base, and then as an A-10 instructor pilot at Davis-Monthan Air Force Base.

He flew A-10s before becoming an instructor pilot for A-10s and F-16s.

During the Gulf War, he was a squadron commander in South Korea.

In 1998, he decided to retire from active duty, in part to take a job as a pilot for United Airlines.

He thought he had left the Air Force for good, not knowing that the second part of his military career just hadn’t begun.

Mitchell starts on the community team

Luke, in west Glendale, was once a mainstay for F-16s, but now trains most of the world’s F-35 pilots.

In the boom years of the 2000s, the West Valley was growing at a rapid pace.

Breedlove came to serve as the base’s commander in 2002. He said he watched as development in El Mirage and Surprise crept closer to the base’s walls.

And he watched as the mayors in those communities pushed it along, he said, far more concerned about “building and real estate, and getting taxes, and so forth,” than they were with the base.

“They just didn’t grasp the economic engine of Luke, the billions of dollars it brings into that economy,” he said. “They just wanted to build houses.”

Meanwhile, the Air Force was trying to cut costs by closing bases and cutting staff and programs at others. The encroachment at Luke made it a target. 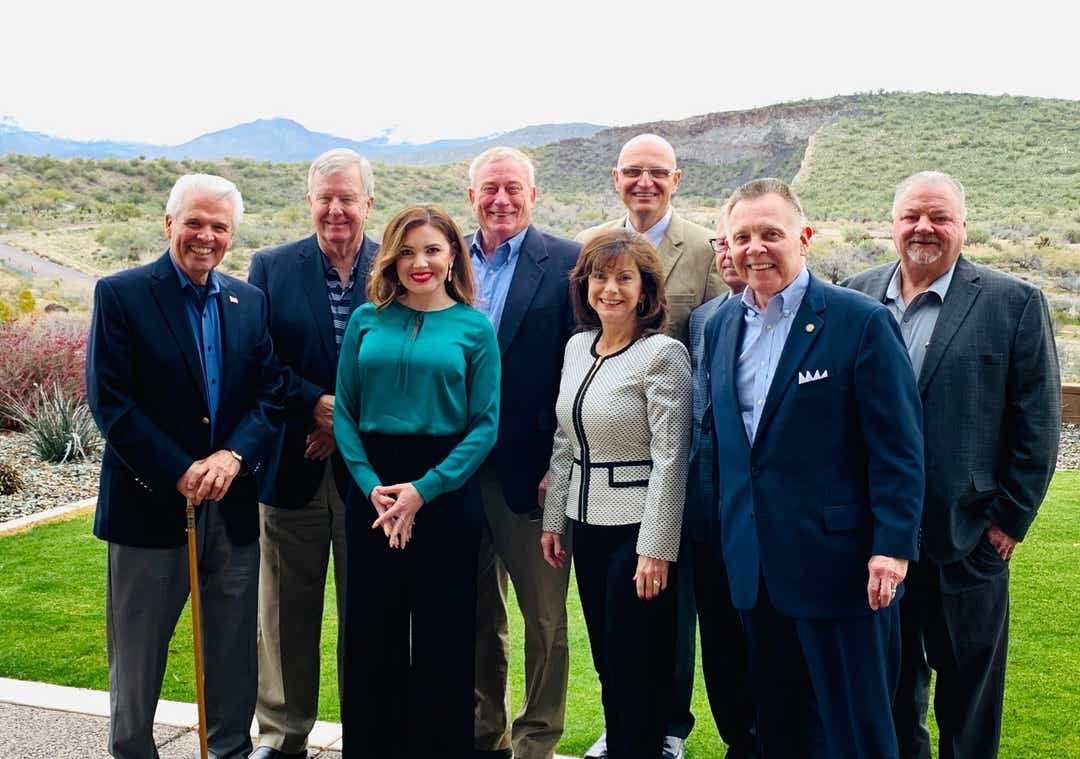 “We were on the cusp of a really bad thing happening to a national asset,” Breedlove said.

Breedlove got the idea for the Community Initiatives Team, which he said he thought could help control the development by making local leaders realize Luke’s importance.

The base adds more than 15,000 jobs and $2.4 billion in economic impact to the state, according to a 2017 study by the Maguire Company, commissioned by the Governor’s Office.

Breedlove knew the right man for the job.

Mitchell had been his operations officer in South Korea for a year when he was a squadron commander, he said, and he was a great leader.

Mitchell put his career with United Airlines on pause and accepted the job.

With a new mission, Breedlove said, Mitchell was “a dog on a bone.”

Mitchell immediately started working on the base’s relationships with the 11 mayors in communities around the base. He helped Breedlove get former U.S. Sen. John McCain to come talk to the mayors to try to get their support for the base in a very tense meeting that was a “turning point” for Luke, Breedlove said.

“He cemented our resolve around Luke Air Force Base more than I think anyone else could have,” Carlat said.

While some positions were cut at Luke during the base closures of that time, the base survived.

Mitchell said he has always tried to find a way to make things work both for the base and the community.

“It would be easier to be that bureaucratic, suck-it-up kinda guy,” Mitchell said, “but that’s just not the way I am. And that’s the success of this office. We just can’t succeed like that.”

‘He made us love Luke because we love him’

Pat Mitchell, Rusty’s wife, who ran the new parent support program at the base for years, said her husband has an ability to connect with people of all personalities.

That includes the base commanders.

He would advise them in a “non-threatening way,” she said.

Commanders are only in their roles at Luke for two years. Pat Mitchell said her husband provided continuity at the base for the community around it.

For base commanders, Rand said, it was invaluable having Mitchell pay attention to what was happening “outside the wire,” so they could focus on the base’s mission.

Carlat said Mitchell put a friendly face on a giant military institution that could have otherwise felt unapproachable.

“Rusty brought a face to something as large as the U.S. Air Force,” she said. “He brought humility to it. He made us love Luke because we love him.”

Meanwhile, Mitchell’s desire to get back in the skies had him back as a United Airlines pilot full-time on the weekends. He worked both jobs up until recently.

Mitchell also has been heavily involved in the work of Fighter Country Partnership, the nonprofit organization that supports the base, said Ron Sites, the organization’s executive director.

That strong relationship has allowed the nonprofit to understand Luke’s needs, Sites said, and then form programs and advocacy around those needs.

How Mitchell helped secure the F-35

Another critical time in Luke’s history was about 10 years ago, when the Air Force was looking for a base that could train pilots on its new aircraft, the F-35.

The surrounding community was concerned at how much louder the skies would become if Luke got the new aircraft. The federal environmental study on the F-35s said the new fighter jets can be as much as 15 decibels louder during landings than an F-16.

Contours around the base dictate how closely development can be built, and what kind of development, because of the noise and risk of crashes.

Luke’s officials knew how crucial it was for the base’s survival for it to get the F-35 program, since it was flying fewer F-16 flights by the day.

As a few mayors came out against the program, Mitchell said he tried to change the tone by explaining the importance of the base.

Breedlove said Mitchell was key to making it happen.

“He had a huge, huge personal impact on that base remaining viable, and on the F-35 coming to Luke,” Breedlove said.

As Luke’s F-35 program has grown, so has the noise and noise complaints, as expected. But Mitchell said he doesn’t think it’s nearly as bad as some expected.

Pat Mitchell said her husband has done a phenomenal job.

“I think the community is going to miss him,” she said.

She imagines Rusty will use his free time to start golfing again, take their Jeep off roading and spend time with their grandchildren.

Mitchell said he is blessed to have had the support of the community, and his wife, over the years. His work gave him a “sense of purpose,” he said.